Last month the two-week survey on Jaybird ended. In total we received 132 responses. I’d like to thank everyone who responded for their input.

I will go by each question and discuss the results, where relevant I will add some info on the influence of these results.

The opening question was about the use of Jaybird: developing applications, or just using it in third party applications/tools. 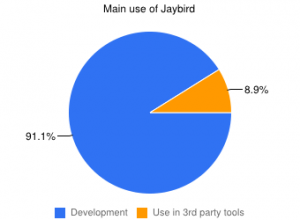 As you can see the overall majority uses Jaybird in development of applications, while the remaining 9% use it in applications developed by others.

Next we asked which Jaybird versions you were using. This question allowed for multiple options, so it adds up to over 100%. 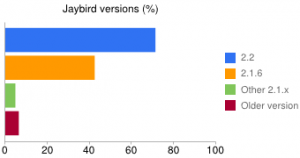 It is good to see that almost three months after release of 2.2 the majority has switched (or is also using) Jaybird 2.2.

If you are still using an older version (especially before 2.1.6), I am interested to know if there are things that are keeping you from switching to newer versions.

We also wanted to know which ‘protocol’ implementations in Jaybird you were using. This question also allowed for multiple options. 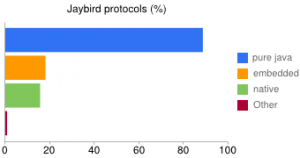 As you can see the vast majority is using the (default) pure java protocol, with embedded and native falling far behind. One respondent chose Other, and specified SQLJ, which is not a standard protocol in Jaybird.

Next: the OSes you use, once again this question allowed for multiple options: 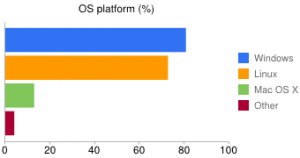 Windows (81%) and Linux (73%) are contending for first place and Mac OS X (13%) in third. Looking at the raw data, 55% use both Linux and Windows, and 8% use Linux, Windows and Max OS X. Of the 5 specifying Other, 2 use FreeBSD and 2 use Solaris, and 1 specified Android, although Jaybird currently doesn’t work on Android.

We are very interested in the versions of Java you use, for our reasons: see question 9. This question allowed for multiple options. 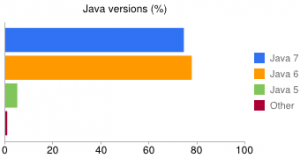 As you can see Java 6 and 7 have the greatest number of users (53% use both Java 6 and 7). Java 5 is only a small minority. The respondent specifying Other is using Java 1.4.

The previous question asked for all Java versions, so now we asked for the primary version you use or (have to) support: 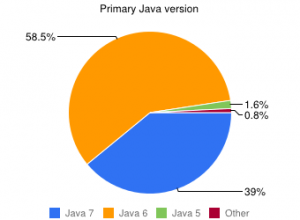 Here we can see that a year after release of Java 7 that Java 6 is still in the lead, followed by Java 7. I am curious how this will develop over the next year, as Java 6 will go to End Of Public Updates in February 2013.

For contrast: the Jaybird 2.2 and 2.2.1 downloads from sourceforge.net show the following distribution (as of last Sunday): 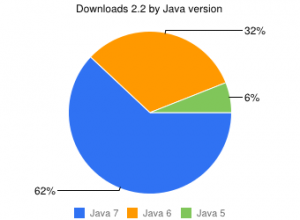 Similar as with Java, we really like to know what Firebird versions you use with Jaybird. This question allowed for multiple options. 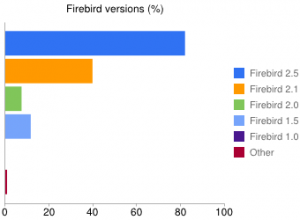 These results mostly confirm my expectations, although I was surprised to see that there are more people (still) using Firebird 1.5 than for example Firebird 2.0. This probably has to do with changes between 1.x and 2.x making it harder to switch to 2.x, than to migrate from 2.0 to 2.1 or 2.5. The 1 specifying Other is using Red Database from Red Soft.

The previous question asked for all Firebird versions you use, this one was about the primary version you use or support. 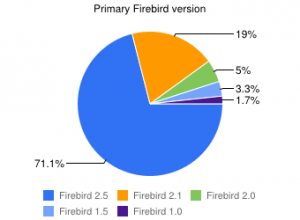 No surprises here: most of you are using Firebird 2.5.

For the few still using Firebird 1.x: please be aware that Jaybird 2.2 is the last version to formally support Firebird 1.x. Future versions of Jaybird might still work with Firebird 1.x, but we will no longer fix bugs that occur only in 1.x, and we might make changes to support or use 2.x features without considering compatibility with Firebird 1.x.

We asked what you think about continuing support for Java 5 in Jaybird 2.3 and later. 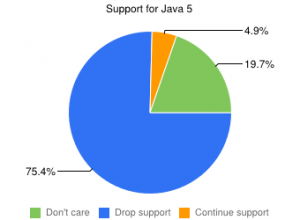 As you can see the majority want us to drop support or didn’t care either way. Given the response here and in questions 5 and 6, we have made the decision to remove Java 5 support in Jaybird 2.3.

Removing Java 5 support from Jaybird 2.3 will allow us to maintain Jaybird as a single codebase (at least for now, who knows what changes Java 8 will need). This makes it a lot easier to improve our JDBC 4.0 and 4.1 support. Until Jaybird 2.3 is released, we will continue Java 5 support with Jaybird 2.2.

10. Types of applications developed with Jaybird

Next question: what type of applications do you develop. This question allowed for multiple options. 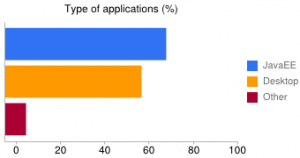 Next survey I will probably add more choices, or use a single choice option to get a better distinction. 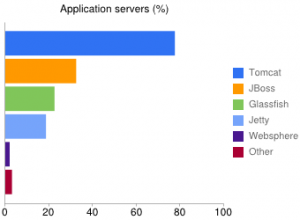 This question allowed for multiple options. Clearly Apache Tomcat is king, with JBoss a distant second.

I am not sure yet how I am going to use these results, but it will probably mostly influence future documentation, examples and testing efforts.

The team for Jaybird is small, so we want to invest our time wisely. The following lists what the respondents think are areas that need improvement: 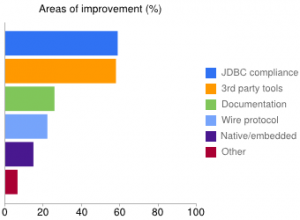 This question allowed for multiple options. Clearly both JDBC compliance and compatibility with third-party tools are most important to you. We will try to give extra attention to these areas. You can help us identify specific improvement points by posting them either on the Firebird-Java list, or on the issue tracker.

Finally we asked if you (or your company) support development of Firebird (and Jaybird) with a membership or sponsorship of the Firebird Foundation. 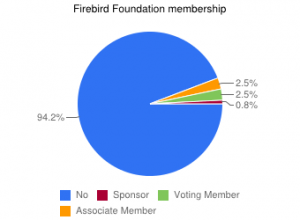 Unfortunately, the vast majority (94%) of respondents is not a member, on the upside: 8% expressed interest to become a member. Becoming a member and contributing financially isn’t the only way to contribute and improve Jaybird (and Firebird in general): reporting issues, contributing patches or writing documentation are all very welcome.

We also included a comment field for additional comments.

Calls for improvements to the code or new features:

For some of these things I can’t make promises, as these require a lot of time and effort with – in my opinion – little gain for Jaybird itself (eg restructuring the driver to get it to work on Android, or to simplify external extensibility).

I think that time and effort can be better directed to other things (eg improving general code quality and structure, JDBC compliance and third-party tools support). However if you want to contribute (to) an improvement like this, you are more than welcome to contact me directly or start a discussion thread on Firebird-Java.

This concludes this overview of the survey results. I plan to do a new survey next year, and once again: thanks for all your input.